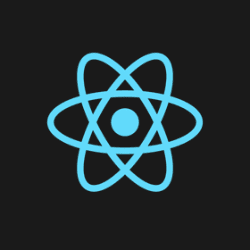 React 16.6 introduced React.lazy and React.Suspense for dynamic code splitting – I tried it out in a real world project.

The React dev community is currently going crazy about React Hooks , which is an experimental proposed feature in React 16.7-alpha. Hooks look super interesting and show great promise. The only downside is that you can not and should not start using them. Not just yet. The API is still under development and subject to changes.

In the midst of all the hype around the experimental features, some people may have forgotten that React 16.6 included some cool new features as well. And they are in a stable version of React, which means they should be production ready.

React 16.6, which was released on October 23, 2018, came with built-in support for code splitting using dynamic imports. The feature for lazily importing component code is called react lazy. React lazy allows you to use the dynamically imported component as if it was a normal component. Suspense, on the other hand, is a feature that allows displaying fallback content in place of a component if the component’s module is not loaded yet.

If you want to read more about React lazy and Suspense, go check out the official documentation . The React docs are great, by the way. The 16.6 release contains other interesting features as well, such as React.memo(), which I haven’t tried out yet. Take a look at the release notes here . Eventually, Suspense is going to be about more than just asynchronously loading and rendering components, in the future releases of React. But let’s stick to the stable version of React.

I wanted to give these features a try in a real world project. My plan was to try it out in one project and if it would improve the performance or the user experience, I would take it into use in other projects as well. At my current project work, we have 4 different projects of varying sizes using React.

Getting Started with Suspense

Getting started was easy: 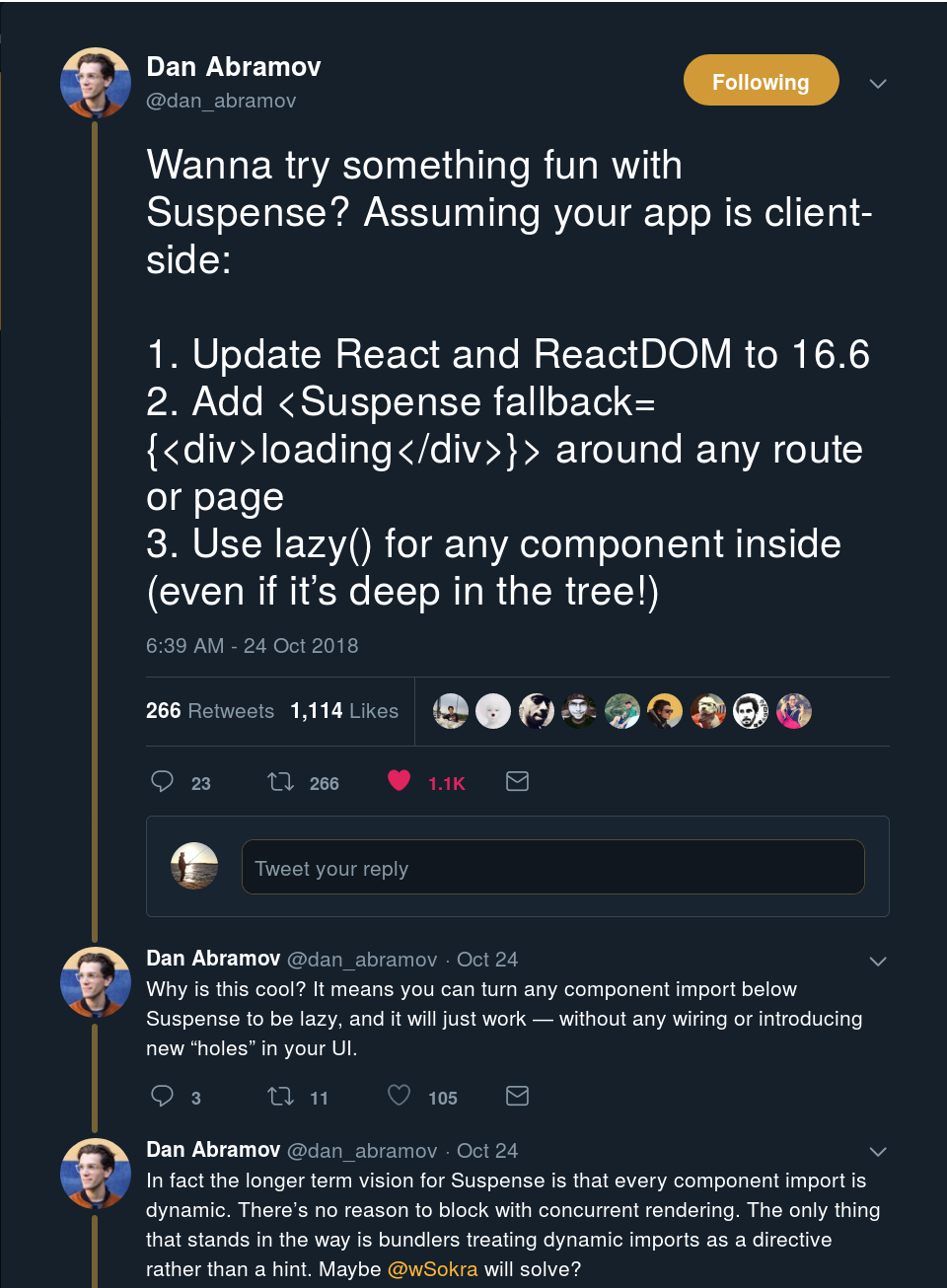 You could literally get started in 60 seconds as you can see from this 60s video .

But, then again, in a real world project things aren’t always that simple. Before doing anything I had to upgrade a bunch of npm packages and then get started trying to use React.lazy. The first thing that struck me when trying to use lazy was an error with types:

And similarly for Suspense, of course. Apparently @types/react does not include types for the newest React version yet. Which, happens because the types are maintained by the community and not React Developers at Facebook.

A TypeScript hack to work around this issue is telling the TypeScript compiler that React is of type any.

Obviously, this is not recommended, and thus the TODO comment. But hey, at least it works.

After this, the obvious error in my setup was, that our config did not support dynamic imports. I had to make the following change to our tsconfig.json file:

Please note that in this particular project we are pretty lucky. We only need to support the newest desktop browsers. This means that we can easily have esnext as our compilation target and use the newest of the new ES/TS features.

After that, I was able to get further, until the next error struck me:

This error I was able to fix by modifying our webpack config for loading TypeScript files by simplifying it to always use ts-loader. As my colleague pointed out, we were using babel, even though we actually did not need it in a TypeScript project.

Side note: while writing this blog post, I realized, that I probably broke the hot loader feature in this project.

Testing React lazy and Suspense in a production-like environment

So, everything seemed to work well locally. The dynamic imports worked, the code splitting seemed to work, the application seemed to work and tests were passing. Additionally, my co-workers had at this point reviewed my PR and added a few improvement suggestions and comments. Everything looked good and I proceeded with deploying this feature to our testing environment, which (of course) uses webpack in production mode.

After deploying it to test environment, the test site was totally blank. Nothing showed up, a fatal error prevented the app from rendering. In fact, if you looked closely, the React app was actually bootstrapped and it was able to render something until it hit the first Suspended component and everything crashed. The console looked like this:

This issue was quite difficult to find a reason for. I asked around for help, and finally got help from Juho Vepsäläinen , who is one of the contributors of webpack. He pointed out that the reason for this issue was not in my ts-loader or in my dynamic imports. Rather, the cause for this issue was in my css-loader config, obviously.

However, the bundle sizes were huge, more than double the size of our bundles in production. Asking publicly about my problem in Twitter helped. I got some nice pointers and finally figured out the reason for increased bundle sizes. The reason was, that in my config, I had replaced the default minimizer config in order to minimize the CSS in production mode. The fact that I did not understand was that now webpack was not optimizing my JS bundles (because I did not tell it to do so).

Only minimizes and optimizes CSS, not JS bundles.

In stead, I wanted to have:

As my trial of using Suspense was basically a proof-of-concept, I did not think thoroughly about where to use code splitting. I just wanted to use it around some large components, that I thought were causing the bundle sizes to grow. Luckily my co-worker pointed me to the docs where route-based code splitting is suggested. This allows a simple way of splitting the bundles based on different views and is probably a good starting point for getting started with dynamic code splitting. Further on, you should analyze your bundles in order to figure out what causes their sizes to become large and what could be possible opportunities for improvements.

Using a tool, such as webpack-bundle-analyser may be a good option for analyzing your webpack bundles and their sizes, as suggested by Tobias Kopperson as you can see in the screenshot below.

Here is a code snippet of our project’s Root component where the routes are defined. The imports for different components are using React.lazy for dynamic importing. We are using TypeScript in our project, but as you can see from the snippet, the typings for React do not contain Suspense and lazy yet. As a workaround, to ignore the type errors, you can just tell the TypeScript compiler that React is of type any and it will ignore errors when accessing properties or methods that should not exist according to the type definitions.

Further down in the render part of our root component, we wrap all of the different routes with <Suspense> and give it a spinner component as the fallback. The spinner will be displayed if loading the component code is slow. This may or may not be good from the user experience point of view.

The way I wrote it initially was quite ugly, because I thought I had to wrap every component with Suspense. Later on, I read some of the documentation and realized, it’s possible to wrap multiple components inside a single <Suspense> component.

So, you may be interested in the results. How much did our application get faster? Does it feel faster? Was it worth the effort?

Here is a screenshot of the network tab before using Suspense:

And here is how it looks like after taking React.lazy and Suspense into use:

Here is a screenshot of the lighthouse results before using Suspense: 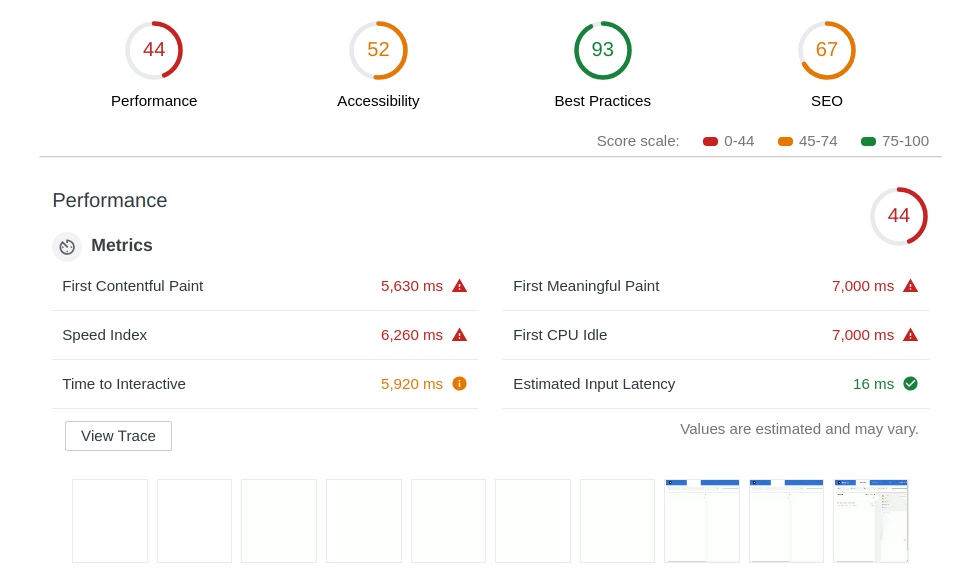 And here are the same results when using React.lazy and Suspense: 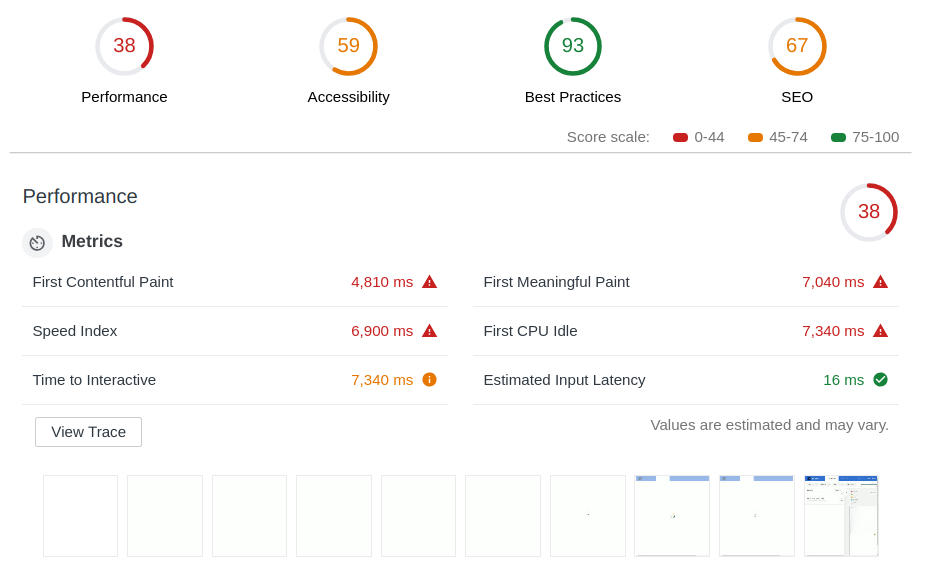 As you can see from the screenshots, our component code is now splitted into more chunks, while the total JS stays roughly the same. However, the lighthouse performance score did not improve, in fact it went down by 6 points. This may just have been caused by small variations in lighthouse results, but the user experience is way more important than some performance scores. On the other hand, the First Contentful Paint metric had improved by 800ms, which is nice, but then again Time To Interactive got worse. The site now feels slightly faster (on slow connections) since component code is now loaded in chunks and a placeholder spinner is displayed if the loading takes long.

As an answer to the question “Was it worth the effort?”, I would say yes, definitely. The actual code changes were small, but we needed to update our config quite a lot. Our current config is now more optimized and cleaner. We now have support for dynamic imports in our config, which makes it easier to use new features in the future. Also, updating packages always good.

Below, you can see the contents of our current working webpack.config.js file. Bear in mind though, that this is the whole config file for our project, and includes more than just supporting dynamic imports and our TypeScript config.

My colleague, Margarita has written a super nice and easily understandable blog post about configuring webpack. You can read it here . And you definitely should read it!

The best way to learn a new thing is to try it out yourself. So, go ahead and try it out! You’ll probably learn a lot more than you learn by reading blog posts.