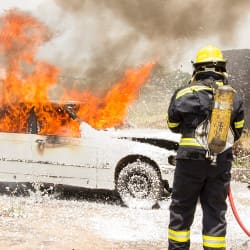 TypeScript will only bring you type checking on compile time, when compiling to JavaScript. On runtime, your code is JS and anything can happen. However, there is a solution to this problem.

TypeScript is absolutely helpful for avoiding the most common problems in JS projects, including undefined is not a function and cannot read property <foo> of undefined. Most of the time, those happen because you have typoed something in your code, or you are using a library and don’t know it’s API correctly. Typings will help you in spotting these problems and more. You can model your data using interfaces or classes and make give type annotations to functions, so that the compiler will warn you if the return value of a function does not match the annotation.

An example where TypeScript compiler will help you:

In this case, you would see the following error:

And hopefully your editor will also highlight the problem to you immediately.

However, there are situations where TypeScript is not able to help you. Those can be also on compile time but more critically they happen on runtime. On runtime, your code is JavaScript and basically everything is of type any. As an example, what would happen if your api endpoint for returning the user information would return:

Which would not match your User interface in TypeScript. However, your code would try to run until at some point it might crash. This is frustrating.

I had heard many people recommend using io-ts for tackling this problem. Last Friday I tried it for the first time and my mind was blown. 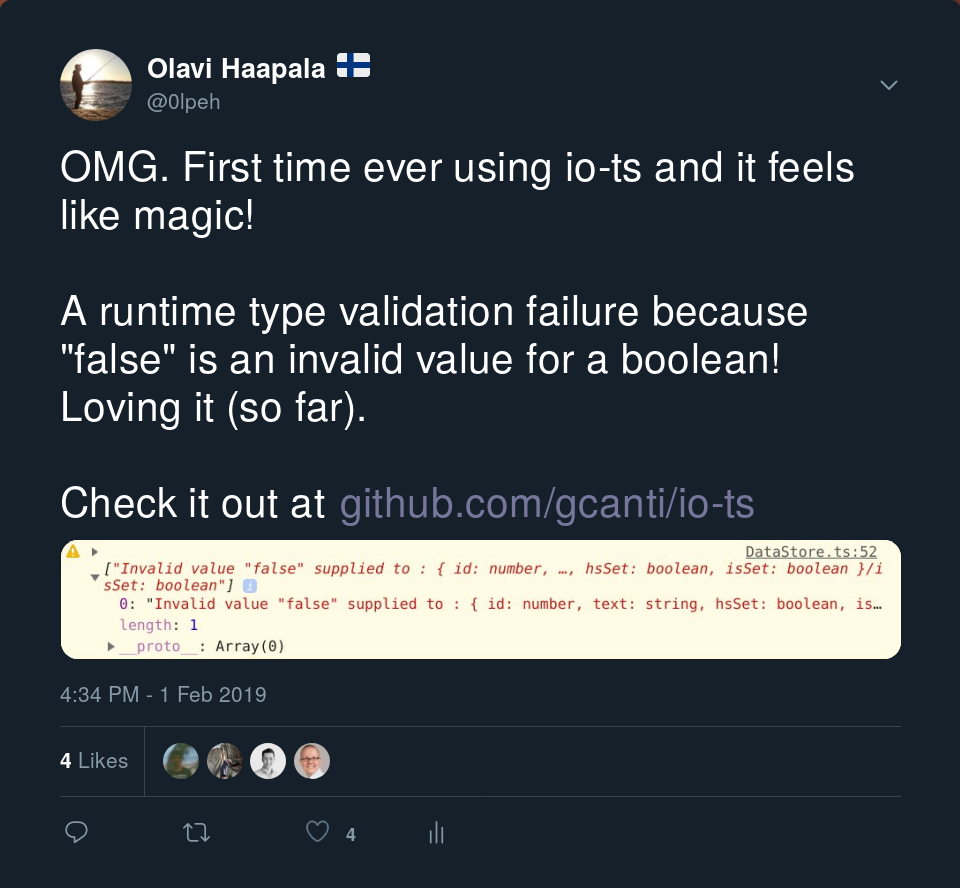 With io-ts, you are able to validate types during runtime. I’m not an expert on this topic yet, but here is an example of how we currently use it in our project.

The type District is an alias so that we don’t have to pass around the type:

Instead we now have:

And then when fetching Districts from the backend, we are able to validate those against the schema:

Where PathReporter is a utility provided by the library for nicely outputting the failed validation.

This means it can either hold an error in Left or the successfully validated value in Right. This is cool.

Then, yesterday I was writing some code and implemented a function that would return a District by its id. The id could of course be invalid and not found in the list of Districts. So, this means the return value of my function getDistrictById is Option<District>, which means it can return a District or nothing in case it’s not found.

Sadly, I thought, we don’t have Option in TS. However I just typed out the type annotation there and my editor suggested to import { Option } from 'fp-ts/lib/Option'. Oh wow! My mind was blown again.

And when calling it, I would check the return value like this:

So, now the only missing piece is pattern matching. I mean, it would be nice to have something like this in TS:

Or maybe there is a solution for that in io-ts or in some other library that I just haven’t discovered yet? Please let me know.

As the author of io-ts helpfully pointed out, there is a way to do pattern matching with io-ts. It can be done using fold or foldL, which is the lazy version of fold. 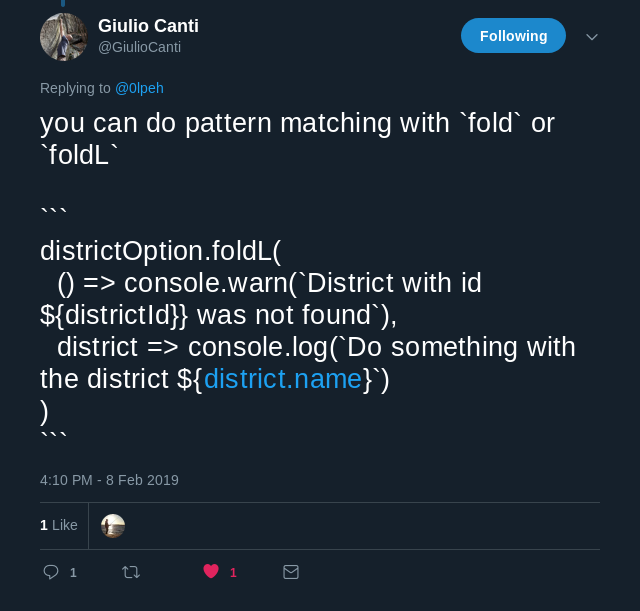 So, my example using foldL looks like this, then: