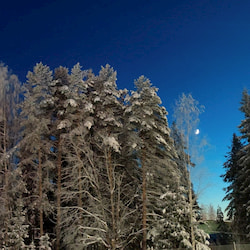 It's 2021, and I thought it would be time to either finish my blog rewrite or try if the old setup would work.

Giving Ruby and Jekyll Another Chance

In my previous blog post, I wrote about how I have been unable to post new blog post because the project stopped working on my computer. Additionally, my blog rewrite has been on hold for a while now due to the pandemic and lack of time, motivation, and energy. In the previous post, I promised to finalize my blog rewrite soon in order to start publishing more content.

However, since it was a new year, I decided to give my Jekyll based project one more chance – and it works! 🎉 I was able to install all the dependencies and start the project locally without problems. Thus, I’m going to leave my blog rewrite for now, and rather start focusing on producing more content.

I think the Jekyll based setup started working again after the v1.11.0 release of Nokogiri. I’m not quite sure though, but I’m glad it is now working on my Ubuntu based laptop.

The Current Setup Is Fine

I think there’s nothing wrong with my current blog setup – if it works. The site itself could need some tiny improvements, but most importantly it needs more content. I personally love the current simplistic design and having the site perform well even on low-end devices and slower networks.

Now, that I’m again able to publish blog posts easily, I’m going to try to be more active in writing blog posts and publishing them 🤞. In fact, I have quite many drafts hanging around – they would need some amount of work in order to be published.

I recently needed to record a simple tutorial, and had to setup OBS for the recording. The setup was surprisingly easy, so I’m thinking about recording more tutorials.

My first ever tutorial is a simple tutorial on how to create a website (HTML file only) and deploy it online in less than 5 min using Netlify (without git). You can watch it on YouTube from the link or the image below:

Create and Deploy a Website Online in Less Than 5 Minutes 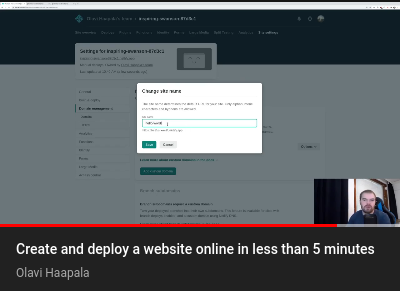 You can see all my (future) tutorials in this YouTube playlist.